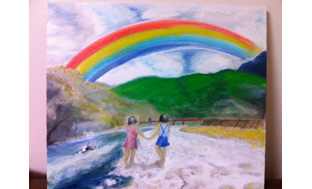 This is a film produced in succession to the last wish of Tazuko Makitsubo who passed away last year.Tazu Hino, living in a suburb of Hiroshima at 5 when the city is A-bombed,sees black rain. 3years later she,a 2nd grader, comes across a mysterious book in the village shadowed by the war and atomic bomb. It is the latest film projecting schoolgirl days of the director Makitsubo ,which is now being shot.